Lizzy - Ch Somerford Liz Taylor is a female puppy from our litter born in April 2008.

We would like to say a big thank you to Carol Thompson of Kadma Weimaraners for campaigning this lovely STAR for us in Queensland. Lizzy is on lease to Carol until December 2009.  Of course how could we not also mention her wonderful handlers and carers Kevin and Donna Horne thank you guys for presenting Lizzy so beautifully.
Lizzy is a litter sister to, Ozzy, Kaiser, Pippa , Ruby, Kelly Jnr, so all  of those puppy owners can follow her progress on Dogzonline.

Here is a little of her story:

A star is Born ..... let me tell you about this amazing Weimaraner.

On her second weekend in the show ring (strutting the stage) she was placed Best Baby Puppy in group three times and Best Baby Puppy in Show twice together with a FIRST in the 3 to 6 months puppy sweepstakes. Since then this little star of the South East Queensland show scene has solidly developed a very strong profile attaining 80 points toward her title of Champion in February 2009 (In australia dogs need 100 points to become a Champions) in the minor puppy class at just 9 months of age.

By the end of 10 months she had her 100 points toward Aust Champion (in Australia dogs can't apply for their Champion title until they are over 12 months of age, even if they already have their points they must wait) and she qualifed for her title 1 week after her first birthday.

By 15 months of age she won her first Best In Show at the Weimaraner Club Qld Speciality Show (OS) on 12/7/2009 under Judge Chloe Dychoff (Qld).

In August 2009 Lizzy won the Weimaraner Bitch Challenge and also Runner Up Best of Breed at the Queensland Royal Dog Show, an amazing feat especially with the tough interstate competition travels to this show every year.

She has attained all of these awards under a wide variety of INTERSTATE and INTERNATIONAL JUDGES. At just 10 months of age she qualified for the 'by invitation only' Queensland Puppy of the Year Show in November 2009.

Lizzy has consistently won Best of Breed, RUIG, Best Class in Show or Best Class in Group and now a Best In Show since she entered the show ring in September 2008.

Currently (8/8/2009), at just 15 months of age Lizzy is in the top 11 of all 3 Dogzonline Weimaraner Breed Competitions and is currently coming FIRST in the Weimareaner Breed Rising Stars Competition
scroll to end of web page to see this on dogzonline.

In early 2010 Lizzy will return to Somerford to give birth to her first litter. We anticipate having puppies on the ground in late March 2010.

MAY THIS STAR AND HER PROGENY CONTINUE TO SHINE BRIGHTLY 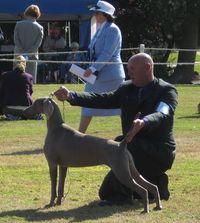 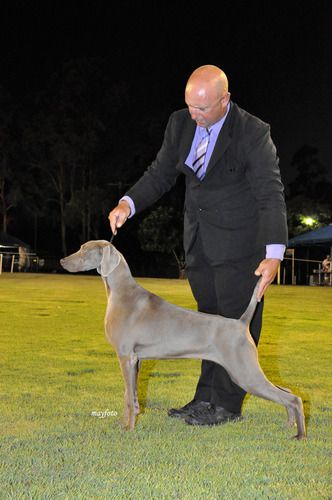 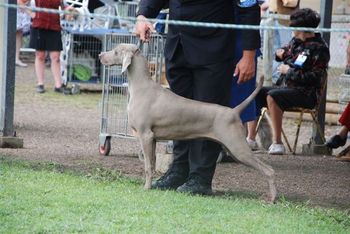 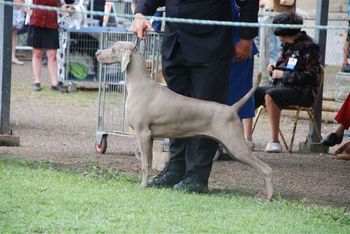 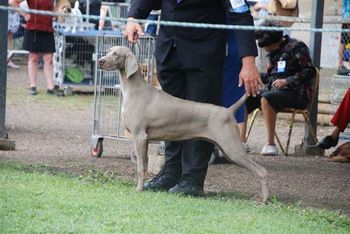 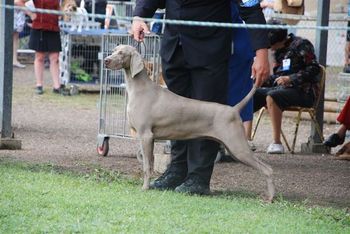